I trust that you all had a good weekend, because I certainly did. I saw the new “Alice in Wonderland” movie, and although it was a little spooky in parts, I must say that the graphics were astounding. And for those of you who were glued to your laptops and desktops with a warm mug of cocoa, and a craving for news bites, then I am sure you will not have missed Baroness Ashton’s plans to take on the Middle East conflict.

Yes, it is true according to “The Times”:

Baroness Ashton of Upholland faces her first big international test as the EU’s top diplomat this week after flying into the Middle East to plead for peace talks to start despite a dramatic increase of tension in the region.

She will find the atmosphere highly charged after the US Secretary of State Hillary Clinton accused Israel of “insulting” the Vice-President, Joe Biden, by announcing new settlement building during his visit to kickstart indirect talks last week. With the Palestinians on the verge of abandoning negotiations and Syria seemingly stepping back from involvement with the EU, Lady Ashton will have a chance to test the “quiet diplomacy” that she promised would deliver results for Europe.

The role of High Representative for Foreign Affairs and Security Policy was created in the Lisbon treaty to give the EU more clout on the world stage. Lady Ashton is struggling to assert herself in a Brussels turf war over her new “EU foreign office” empire but she will ultimately be judged on her handling of the big international issues such as the quest for Middle East peace.

The organisation of her five-day trip to the region has been described as chaotic, with a constantly changing programme, but it is an ambitious attempt to meet key players in six countries.

Israel has sanctioned a visit to Gaza on Thursday but Lady Ashton’s office has cautiously said only that she “hoped” to visit a UN food project there. There are no plans to break the international ban on direct talks with the Hamas administration.

“She claims to have good people skills. Let’s see if she can use them to compensate for her lack of experience and convince the Palestinians and Israelis to get back round the table directly or indirectly,” said Charles Tannock, a Conservative MEP on the European Parliament foreign affairs committee. “She does not want to come back with nothing. She has to show that the EU is an engaged player and it is also even-handed.”

Lady Ashton and a small entourage of advisers flew to Egypt in a chartered aircraft last night and she will then travel to Syria, Lebanon, Jordan, Israel and the Palestinian territories before heading to Moscow on Friday for a meeting of the international quartet on the Middle East. She will meet foreign ministers and presidents of Syria and Lebanon and possibly Binyamin Netanyahu, the Israeli Prime Minister.

In a statement, Lady Ashton said: “I am going to the region with a clear message to encourage all actors to engage in talks that lead us to a comprehensive regional peace.”

She will prepare for her trip with a telephone briefing from her old friend Tony Blair, the quartet’s envoy and the man who ennobled her in 1999 when she was head of Hertfordshire Health Authority. An Israeli announcement of 1,600 new homes in East Jerusalem overshadowed last week’s visit by Mr Biden and threatens to wreck Lady Ashton’s efforts to find a way of delivering tough messages as well as urging all parties back to talks.

Lady Ashton’s office could not say yesterday whether she would raise again the issue of the use by alleged Israeli agents of British passports in the assassination of a leading Hamas member in Dubai. Nor could it say whether she would push the European Parliament’s call for the release of the Israeli soldier Gilad Schalit from Gaza.

Lady Ashton is under pressure from the European Parliament to prioritise human rights issues, including the plight of Coptic Christians in Egypt, where eight were gunned down in January. She is also keen to revive an EU-Syria Association Agreement believed to be held up by human rights concerns.

Above all she will be expected to get more for the EU from the enormous sums of money it spends on development programmes, especially the €1 billion (£907 million) a year spent in the Palestinian territories. Egypt will receive €449 million in 2011-13, Syria €129 million in the same period, Lebanon €150 million, Jordan €223 million and Israel €4 million.

“She will not solve the peace process on her first flying visit,” said Hugo Brady, of the Centre for European Reform. “The full glare of the international media is on her now to see if she will make any mistakes but she simply has to show that she is an engaged player and not create a vacuum for criticism to flow into. “The EU has yet to realise its full potential for influence in that part of the world and it should have some extra weight for all the money it is pouring in.” 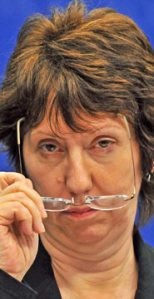 I can only wish Mrs Ashton the best of luck as she takes on the queen mother of all conflicts. The Middle East and the EU are closely tied through various EU agreements and treaties. The most important being the EU Neighbourhood Policy or (ENP).  It is easy to ruffle feathers given the number of states which are part of the ENP that are culpable of human rights abuses and anti-democratic behavior. Mrs Ashton has to take a leaf out of Hillary Clinton’s book if she is to have any legitimacy in the messy world of Middle East diplomacy.

The EU Parliament will be watching closely, and so will her detractors.  We shall have to see how the next few days pan out.