Yes, folks, today I am just loving the spring weather. Brussels is just brimming with life once again, and people are tumbling onto the streets in a whimsical and romantic way. A ray of sunshine really does wonders!

So, anyway, the subject of this post is about an article that was published in today’s NY Times. It relates to the issue of obesity in the state of Qatar. Qatar is now officially one of the top five countries with the highest rate of obesity in the world. Qataris are fortunate to work, shop and relax in comfortable air-conditioned buildings, where food is part and parcel of socializing. Eating communally often leads to over-consumption and the cuisine is usually laden with butter, fat and salt. This is not to forget the sweet tea and cakes that the region is known for.

According to the Economist, four of the world’s fattest countries are in the Gulf. This includes: Bahrain, Saudi Arabia, Kuwait and of course, Qatar. Obesity in developed countries usually affects those who are impoverished, but this  is not the case in these wealthy Middle East kingdoms. In Saudi Arabia, where cinemas, bars and discos are forbidden, it is no wonder that locals flock to malls where they can relax for hours in coffee shops and fast food joints. Saudis love to eat and shop, because there is not much else to do outdoors.

The problem of obesity is worse for women.  According to Middle East Online, 70% of Gulf women are obese. The problem could be catastrophic for the region if nothing is done to bring the levels under control. In  Saudi Arabia according to the Pakistani Daily Dawn,   “ Physical education in girls’ schools is almost non-existent. In other Gulf countries, although the situation may be slightly better, there is a definite inclination towards discouraging women from taking part in physical activity”.

A sedentary lifestyle coupled with fast food and societal influences that encourage eating is a recipe for disaster. Diabetes, hypertension and heart disease is a widespread problem that many complain is being dealt with through treatment rather than prevention. Health services are world-class, but cultural norms and behavior need to shift if things are to improve. 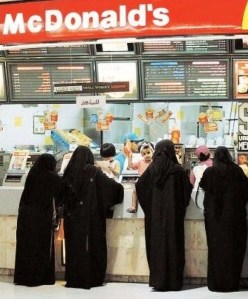