Well today was a rather busy day for me. I had some consular affairs to attend to at the British Embassy, and panel discussions to listen to regarding Armenian and Turkish relations. However today I was fortunate to listen to the former director of Mossad, Ephraim Halevy speak in the Parliament. He was articulate and it is clear to see why he was chosen for the job. On the other hand the EU’s anti-terrorism tsar Gilles de Kerchove seemed totally amateurish and out-of-touch.

But for the purpose of this post, I feel that it is in my interest to discuss the issue of Turkey. It is impossible to ignore the fact that Turkey is undergoing a metamorphosis in its political culture. Since 2002, the AK party under Prime Minister Recep Tayyip Erdogan, has sought to reduce the secularist trappings of Turkish society through supporting women’s right to wear the veil; discourage alcohol consumption and encourage the judiciary to change its “mind-set”.

The AKP has portrayed itself as a sort of half-way party between being liberal-democratic and Islamic. Discouraged by the EU’s attempts to stifle prospects of future membership, the AKP, and hoards of Turks have thought it best to give Europe the cold shoulder. In the latest round of Security Council sanctions against Iran, the Turkish delegation voted no to increasing pressure on Tehran. The two countries would appear to be the best of friends, even though the ties only run skin-deep, because I would hazard a guess that Erdogan is wary of Iran’s agenda and vice versa. Also, the Turks are softening their stance towards Armenia in a bid to rebrand themselves as magnanimous peace makers, which is viewed with some suspicionby its neighbours: most notably Azerbaijan.

Truth be told that given Turkey’s prominence as an NATO member, and as a strategic ally for the west, you would think that Erdogan would have some reservations in altering the country’s foreign  policy; which is clearly not the case. The only hope is that the new leader of the opposition party CHP, Kemal Kilicdaroglu, will be able to reinvigorate its Kemalist roots among its members and supporters.

On the outside it appears that the Turkish government is set on eviscerating the legacy of Ataturk and removing the powers of the military to enforce the constitution. If this is true, Turkish society will be neatly split between the secularists and the Islamists in a way that has not been seen before.

It is up to the Republican People’s Party to offer an alternative that is Turkish-centric, optimistic and maintains the country’s prestige in the region. Turkey’s fortune in being secular, but traditional, western and at the same time eastern is what makes it special,  and is something worth preserving. Kilicdaroglu has expressed his support for EU membership, and has managed to recruit prominent diplomats into the CHP.

However, the fundamental test for any political party is its  ability to deliver services and implement policies which are essential to the country’s economic and social development. In the long run, at least in a democracy, this is what could make or break the AKP. 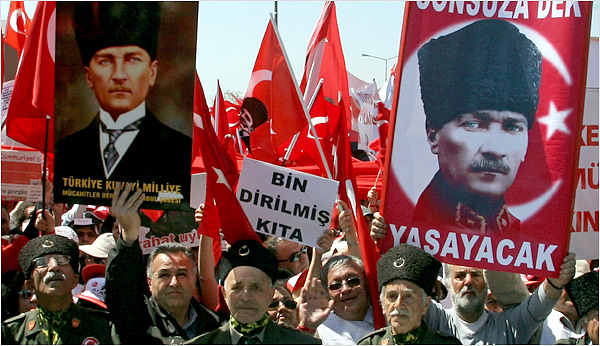