Aww, the  joys of a tranquil Sunday afternoon. I am in my usual working frame whereby I have 100 windows open on my computer; my mouse clicks back and forth between Yahoo, YouTube and Facebook and I am busy writing an article, working on a new blog post, reading an article and taking notes off an old op-ed. I have to learn to do one thing at a time. I am just part of this new phenomenon of online ADD sufferers. None of us can sit still and just plain focus. We are like frogs hopping from one lily to the next and it is impossible to get anything done.

So, today I decided to focus on Syria’s man of the hour, Mr Bashar al-Assad. He is one of the most influential leaders in the Middle Easy, but possesses negligible charisma and his pinched nez only adds to his haughtiness. He took power in 2000 after the death of his father Hafiz. Despite Syria’s reputation as a facilitator of groups such as Hamas, Hezbollah and other militant groups, al-Assad manages to court both the West and the Arab world. When he is not meeting Ahmadinejad, he is being interviewed by Diane Sawyer, answering inane questions such as: what music do you have on your ipod? It helps that he has a glamorous rake of a wife, Asma, who grew up in London and speaks with a clipped BBC accent. It is no wonder they are often compared to Jordan’s royal family.

When he came to power, Bashar went on a charm offensive saying that he would allow the press greater freedom and was in favour of opening up public discourse. The “Damascus Spring” was short-lived. By August 2001, the government began to clamp down hard on journalists, academics and human rights defenders. Since 1963, the Emergency Law has been imposed in order to keep the country’s civil society in check. There is no independent media and internet censorship of political websites is pervasive according to Human Rights Watch. One blogger, Karim Arbaji, was sentenced in 2009 to three years in prison on the charge of “spreading false information that can weaken national sentiment”. Ali Farzat who produced the satirical paper “The Lamplighter” took advantage of the spirit of openness in the early months of Bashar’s rule; he wanted to “chase the police out of people’s minds”. The paper was extremely popular, but little by little the censors started to erode its content and within two years, it was shut down. During the initial phases of the crack down, the minister for information declared the expression “civil society” to be an “American term” that had been given “additional meaning”, by groups that seek to become political parties. In other words, all press, NGOs and charities, unless state sanctioned, were verboden. Syria has been heavily criticised for imposing travel bans on human rights defenders. According to the Economist, Syria is the worst offender in the Arab world for this kind of punishment. An estimated 400 people have been barred from attending seminars, conferences or work shops abroad. Ironically, Asma al-Assad has made it her mission to empower young Syrians to play a role in the social development of the country and aspire to become active citizens, presumably as long as it jives with the Ba’ath party’s agenda.

Chip off the old block

Bashar never intended to rule. His brother Basil had been groomed for the role, but died in a car accident in 1994. Bashar was busy training to be an ophthalmologist at the time. Hafiz, who ruled Syria for more than thirty years, was reputed to be highly disciplined as a result of his military training. During the colonial period, the French welcomed Alawities into the army, since they were a minority-group, who were viewed unfavourably by the Sunni majority. At present the Alawites make up only 20% of Syria’s population.

Hafiz worked to cultivate a solid elite composed of both Sunnis and Alawites, who were allied to the ruling Ba’ath party. In 2007—surprise, surprise– Bashar was re-elected with a 97% percentage turn out in favour of a second term. As president, he has seen to it that Syria retains its place as the vanguard state for Arab nationalism. It did not sell out to the Americans, and has made no moves to settle disputes with Israel. Many pundits have put this down to the shaky position that comes from being from a minority group. It is better to seem more Catholic than the Pope. Arabism allows Islamism to be nipped in the bud.

Syria is a strategic tool for Iran, as it is the highway for Hezbollah and the movement of illicit goods. Bashar, unlike his father, has been keen to openly endorse Hassan Nasrallah in Lebanon. It has helped Syria gain the upper hand in the region as a bulwark against western imperialism. It also deflects scrutiny away from the regime’s total absence of democratic principles. Bashar excuses such realities with glib suggestions that democracy takes time and you cannot impose it from above. Perhaps not, however democracy is not difficult to foster. It is simply about accepting an opposite point of view and allowing  newspapers to be critical. This is what is required, but accountability frightens the Ba’ath party, and it is easier to buy loyalty.

Syria is not expecting to change its leadership anytime soon. The powerful secret police or Mukhabarat spread fear within the population, and the western media  is left sated  by elegant pictures of Bashar and his elegant wife. It is somewhat akin to the days of the Shah and Shahbanou of Iran. Syria is a country that wields tremendous influence, but its leadership will never be truly secure , and Bashar al-Assad’s stiff exterior undoubtedly hides a mass of insecurities. 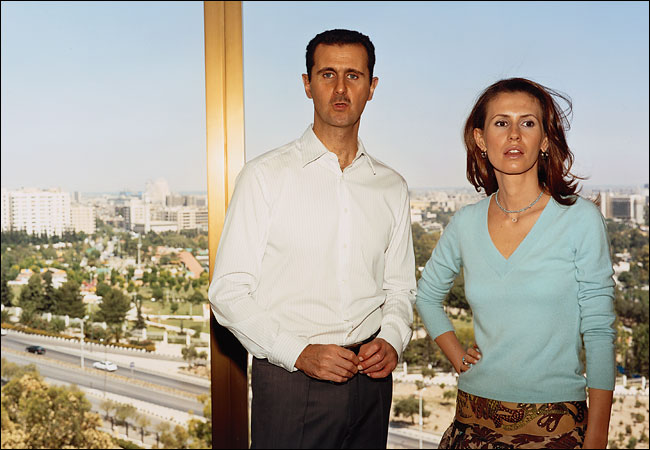