Well, I hope that you all had a lovely guilt-free Christmas and New Year’s day . I spent my New Year’s eve on a Swiss mountain with my fingers stuck in my ears trying to drown out the incessant sound of fire works and firecrackers. I have always been sensitive to loud bangs. I don’t think I am made for living in the Middle East. I am also in the midst of getting back into shape, and my legs are still stiff from my Sunday jog. Hopefully it will pass soon.  I want to feel the burn baby!

Anyway, as it is January, millions of students around the globe are heading back to school after the holidays, and whilst most will be filled with displeasure at the thought, it is unlikely that many will be considering what kind of education they are receiving.

In the Middle East today styles of education and curricula vary from country to country. In 2009, four Arab states took part in the Organization for Economic Cooperation and Development’s Programme for International Student Assessment or the PISA exam. They are considered to be international benchmark tests. The states which participated included: Qatar, Jordan, Tunisia and Dubai. In December 27, 2010, the UK’s Financial Times announced the results of the exam which revealed that three quarters of Qatari and Tunisian students, and 65% of Jordanian students attained a level one grade or below in mathematics. Anything below level one, students are judged to “have serious difficulties in using mathematical literacy as a tool to advance their knowledge and skills in other areas”.

In Qatar, the government has been working tirelessly to modernize its education system by permitting  independent schools to open, which are based on the Charter schools movement in the US.  Yet much work still needs to be done before Qatar’s education system will be in line with some of the world’s top performers. In stark contrast, in Singapore, only 9% of students received a level one grade in the PISA tests. The FT also noted that employers in the Arab world complain of the low skill levels amongst nationals, which encourages the need to take on workers from abroad.

In 2008, the World Bank released a report citing that education in  Arab states is falling behind the rest of the world, and ranked: Morocco, Yemen, Iraq and Djibouti as the worst educational reformers. According to the Middle East business periodical MEED’s education survey, within the GCC or Gulf Cooperation Council, Saudi Arabian school leavers are considered to be the weakest and least prepared for the job market. Outside of GCC states, Lebanese and Jordanian school graduates were judged to be the best prepared.  One of the possible reasons for this could be institutions such as the American University of Beirut which has groomed thousands of the region’s top students for 140 years.

Many education experts believe that old-fashioned rote learning is discouraging students from independent and creative thinking . Countries in the Gulf region have been at the forefront of challenging the status quo by introducing new and innovative styles of teaching. Education is not simply about facts and figures, but cultivating an analytical mind with which one can understand the world around them.

In MEED’s Education Survey for 2010, school leavers in the Middle East were found to be lacking key skills such as time management, and needed to improve  their problem-solving and verbal-communication abilities. The survey cited that young people are not exposed to enough creative activities such as music, drama and art. MEED noted that in most states, students do not engage in such subjects after the age of ten. Oman has introduced fine arts, as well as a health and physical education programme into its schools curriculum.

For one  of the Middle East most populous states, Egypt’s education system ranks poorly.  The German research foundation Bertelsmann reported that Egypt is one of nine countries with the highest illiteracy rates in the world, with an adult illiteracy rate of 30%. The country’s education sector is critically under funded:  83% of the government’s resources are allocated to pay teachers’ salaries, which leaves precious little left to pay for equipment and teaching resources. According to Ahmad Darwish, who is the Minister of Administrative Development, Egypt needs to build 1000 schools per year in order to accommodate the country’s expanding population. In Saudi Arabia, the Government is desperately trying to take a leaf from its neighbour’s books and is in the midst of spending billions on erecting new universities. It is clear that they will have to play catch up given that according to a 2010 UNESCO report, Saudi Arabia spends 0.05% of its GDP on scientific research, which is preceded by Bahrain which spends 0.04%.

The Middle East faces a raft of challenges such as water shortages, a decline in agricultural activity and an over-reliance on food imports, which means it needs men and women at the ready who are willing to tackle these problems head on. Countries need to attract local talent, because thousands of graduates continue to leave year after year taking precious knowledge with them, as most will only find opportunities abroad.

Iran is one country which is suffering a serious brain drain. In 2006, the IMF reported that 150,000 went abroad in search of better academic and professional opportunities. Iran’s state universities are notoriously competitive, and since the government’s brush with downfall in 2009, the Islamic Republic is in the midst of overhauling the education system to cut out “Western influence”, according to an article published recently  in the Washington Post. In September, Iranian students will be exposed to a new curriculum which will introduce them to  “political training” and “living skills” that will warn against “perverted political movements” and encourage girls to marry at an early age. The Post also reported that university subjects such as law, psychology, sociology and other studies are to be drastically altered, with officials from the Science Ministry, which has responsibility for higher education, working to strip out what they describe as Western theories and replace them with Islamic ones.

Israel, surprisingly, despite having some of the world’s leading sites of research such as the Technion in Haifa and the Hebrew University in Jerusalem, has in relation to its GDP, some of the lowest paid teachers in the world . More shockingly, Haaretz newspaper reported that only 22% of Israeli maths teachers have a degree in mathematics. An Education Ministry official said: “inadequate education, among both upper and lower school teachers, is a major reason why Israeli students do poorly on internationally scored math exams”. What’s more, Israel ranked 41 out of 46 out of the participating countries who sat the PISA exams. It is widely acknowledged that the education sector is critically under-resourced, and teachers are neglected within the civil service.

Overall, regimes in the Middle East need to do more to bring their respective states up to speed in the field of education. Unfortunately, many authoritarian and undemocratic countries may be reluctant to invest heavily given the risks posed by a well-educated population. What is happening in Tunisia is certainly a case in point; and it is not too difficult to list those regimes culpable of limiting and impeding education to the masses for this reason. Yet, being educated is what most people in the world aspire to be, and it is the moral duty of governments to give people this opportunity. In many of the countries mentioned above, the governments have the resources with which to provide a world-class education, and yet fail to do so. In 2011, this is a real disgrace! 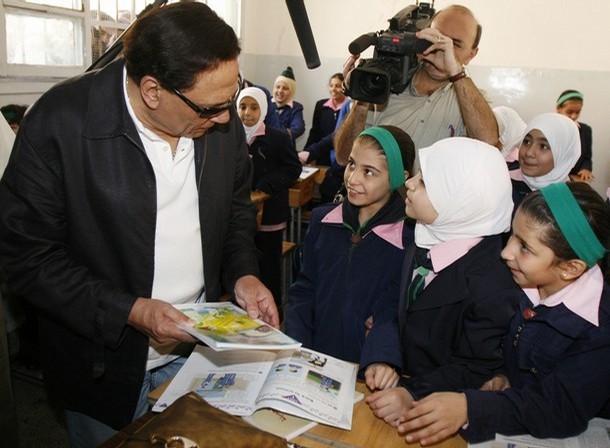