Well, I am pleased to say that this is my 50th post, and I am excited because I never thought that I would be able to make it this far. I really didn’t! I have the attention span of a green-fly, and procrastination is a word, that for me, has endured long since I left university, which in my opinion, is a mecca for procrastinators. The excuses, the excuses! I always found a reason to wander down to our cute little Starbucks to fill up on mocha shakes, chocolate biscuits and milky-coffee mush in any form to break from the sheer dullness of having to write some paper. The hours spent lingering over notes taken from books; the writing and rewriting of that crucial first paragraph and thinking: “wow, when this essay is over, I am going to spend all Friday night watching Sex and the City without moving with a box of fridge cake in my lap”. However once it is complete, you are usually-or should I say, I, usually am so bleary eyed from throwing an all-nighter, drinking anything, and I mean anything with caffeine or sugar, that I just want to throw the paper in my professor’s pigeon-hole and fall into bed, and of course, invariably, I would wake up the next morning feeling guilty about the caffeine fuelled antics undertaken to finish a stupid paper, that I would swear to be more organized and productive next time. Yes, next time! That is a safe bet. Anyway, after that long-winded intro, I wanted to inform you, that this blog has been crucial in helping me tackle my writer’s block and give me a chance to discuss issues which I truly love, and mean something to me. So, I want to say to all of you out there, I love you soooo much!!!!

Central Asia is a vast region, full of oil, water, gas, radical Islamists and some of the world’s most bizarrely named leaders. One of the largest and most developed countries is Uzbekistan. It sits along the ancient Silk Road and is the home of the beautiful cities of Samarkand and Bukhara. Since the collapse of the Soviet Union, the authoritarian Islam Karimov has been at the helm. He has a fierce reputation and has no time for critics. In April 2011, Human Rights Watch was kicked out of the country, and in 2005 foreign media was banned due to reports of widespread government abuse and the routine crushing of dissent.  Opponents of the regime are often subject to torture and horrendous stories have emerged of Karimov’s enemies being boiled alive. However, the west has not made life too difficult for him, as the country is a key transport hub for the US military and  acts as a key supply line to Afghanistan. In 2005, the regime was blamed for the killing of protesters in the eastern city of Andijan, after which, in a fit of anger, Karimov closed down the US airbase at Karshi-Khanabad and he decided to court the attention of Russia.  It did not take long however for the west to ease  its position, as it sought easy access to Central Asian fuel sources.

One issue which poses a tremendous problem for Karimov is the threat of Islamic extremists, who operate in the Fergana Valley and regularly carry out hit and run attacks on Uzbek troops. Wahhabis backed by Saudi Arabia ensure that alcohol is banned, women are forced to cover, and the capital, Tashkent has seen its share of terror attacks orchestrated by the Islamic Movement of Uzbekistan IMU, which takes its inspiration from the Taliban. Hundreds of suspected members have been arrested and the United States government has given Karimov generous grants of up to $150 million USD to tackle this problem. US Green Berets train Uzbek soldiers and carry out joint exercises with the aim to defeat Islamic insurgents.

However Uzbekistan is also a place where corruption is pumped through the water system. People refer to the practice of bribery and kickbacks as uzbekchilik or Uzbekness. The regime has formed links with mafia groups who make it almost impossible for ordinary Uzbeks to set up companies or spread their entrepreneurial wings. The society is tightly controlled;  a system of councils called, mohalla, run by male elders monitor community comings and goings, and the capital is saturated with members of the National Security Service. No one dares to speak out and there is little chance of any mass opposition coming to the fore anytime soon.

Far from living under the blowtorch of the regime, Karimov’s daughter, Gulnara talks about her country with nauseating optimism. She has become an object of international attention after Wikileaks released US diplomatic cables in 2010, which revealed that she is the single most hated woman in the country.  Gulnara is a towering central Asian beauty. Her hair is usually layered effortlessly on her shoulders; lips caramelized with gloss and she talks with a kind of saccharine sincerity, as if she is competing to be Miss World.  On paper, she is highly accomplished, and listing Miss Karimova’s achievements could make you quiver; however given that her father is a thorough-bred kleptocrat, it leaves few guesses as to how she clawed here way to the top. Today, there is almost no aspect of political, economic and cultural life inside Uzbekistan that the Harvard-educated Karimova does not play a role. On the frivolous side, she is a pop singer called Googoosha, who has sung with Julio Iglesias. She writes poetry, designs jewellery, organizes cultural festivals, where top singers such as Sting come to play, and owns a fashion label called Guli, which retails in Tashkent and Moscow. She also teaches world economy and diplomacy at the University of Tashkent and has innumerable ties to Uzbek-based firms.

She began her career working in the Department of Political Analysis and Forecast in the Ministry of Foreign Affairs, and later became an adviser to the foreign affairs minister. Her father then sent her to Moscow to work as a counsellor in the Uzbek embassy. In 2008, she was appointed as the country’s ambassador to the United Nations in Geneva, and was also Uzbekistan’s ambassador to Spain.  Little by little, not content with being a traditional Uzbek woman, Gulnara’s avarice started to rampage. She obtained holdings in Dubai, Geneva, as well as a retail complex, nightclubs and a holiday resort. At any time a successful company in Uzbekistan could expect a knock at the door by Miss Karimova. It is widely reported that she had links to Zeromax, which was a mega firm, involved in oil, gas, mining transport and agriculture. It generated hundreds of millions in revenue. According to Foreign Policy magazine Zeromax was “essentially one of the facades behind which Gulnara Karimova continues to tighten her grip on any and all available sources of income in the country by any means she deems necessary with little or no regard for legal niceties”. According to Wikileaks, one businessman from the US, who turned down Miss Karimova’s offer to buy into the telecommunications firm, Skytel, had its frequency jammed by the Uzbek government.

Gulnara’s influential role inside Uzbekistan, was first brought to the fore in 2002 following her divorce from Afghan-American businessman Mansur Maqsudi, who was known for setting up a Coca Cola bottling plant in Tashkent. He fought for custody of their two children, and a court in New Jersey even issued a warrant for Gulnara’s arrest when she refused to attend the custody hearing. Gulnara accused him of selling oil from Saddam Hussein, while he claimed she was sending Uzbek prostitutes to Dubai. Regardless, back in Uzbekistan, Maqsudi’s business interests started to crumble: tax and fire inspectors, customs men and government agents descended on his bottling plant.  Maqsudi, his brother and father were accused of tax evasion, corruption, and twenty-four members of his family were deported at gunpoint to Afghanistan. Needless to say, Gulnara got a little of what she wanted with the help of daddy Karimov.

In his early seventies, it is reported that Uzbekistan’s strong man is not well, and Gulnara could be a possible successor. However, it remains to be seen if she will be able to induce the same loyalty and fear as her father. For the moment, she remains insouciant, doing interviews for women’s magazines and accumulating vast wealth; although she of all people would never want to give the impression that she is anything less than a hardworking businesswoman, philanthropist and mother. In a 2010 interview for ELLE magazine, Gulnara said “Despite the impression I make on people in terms of my appearance, in my personal life I am not pretentious. For me, understanding is above all. Mutual understanding. If you have that, you can adapt to any rhythm of life. But to make this happen, you have to go through quests, trials and tribulations, peaks and troughs, work hard on yourself and learn from mistakes”. Ordinary Uzbeks would probably say Miss Karimova is not learning fast enough. 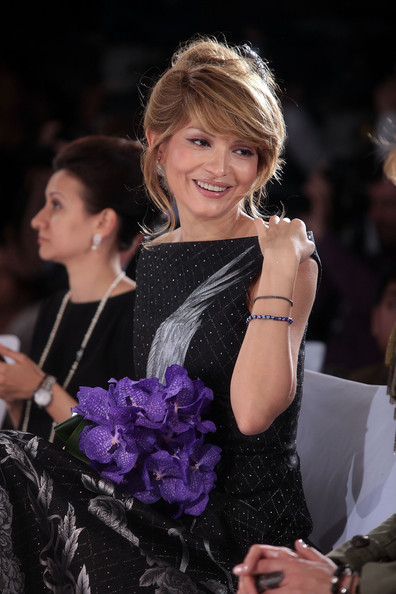