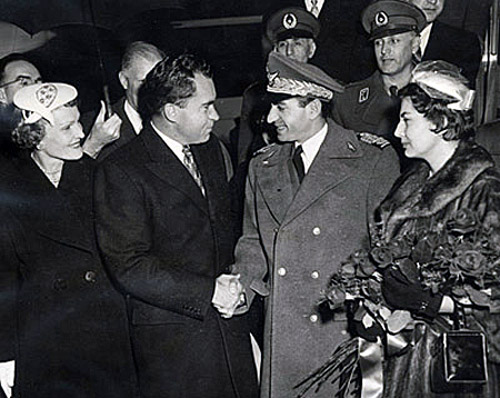 In 1953, after an arduous journey across Asia, US vice-president Richard Nixon and his wife Pat finally arrived in Tehran, which was scheduled as their final destination before returning to Washington. As Nixon would later recall in a speech given during a visit by the shah, “despite the deep depression of spirit which seemed to infect many of those who observed Iran in that period of crisis, His Majesty saw the problems but also had a vision for the future”.

In Nixon, Mohammad Reza Shah Pahlavi saw a man who was very much on the same page as him. After their first meeting, Nixon noted that with the shah, he “sensed an inner strength in him and I felt that in the years ahead he would become a strong leader”. Together these two men, from very different backgrounds worked to ensure the primacy of US interests in the Middle East. For anyone who briefly studies the Nixon doctrine, they will see that Iran formed an important part. The shah would police the region with the tacit understanding that he would be supplied and supported from afar. This was the ideal solution for the US, since the war in Vietnam had consumed much of the country´s militaristic energy.

According to the academic Gholam Reza Afkhami, it was Ardeshir Zahedi, later to become the shah’s foreign minister, who was instrumental in bringing the president and the shah together. Even after Nixon´s failed bid to become governor of California in 1962, an outcome which had left him in the political wilderness, Zahedi maintained his friendship with the former vice-president.  Later on, according to Armin Meyer who served as US Ambassador to Iran during the late 1960s, the genesis of the Nixon doctrine emerged in 1967, while Nixon was on a mission to the country. A meeting had been arranged by Zahedi, but according to Afkhami, the shah was initially reluctant to meet, since he did not want to sully his relationship with President Lyndon B Johnson, even though he complained that “Harvard boys” in the administration had too much control over US foreign policy. Yet as a result of this meeting the men understood and would come to understand together how much their geopolitical ambitions were aligned.

There is some debate about the extent of the personal affinity that existed between Nixon and the shah. Biographer Anthony Summers asserts that they were close friends, as well as Abbas Milani, but Gholam Reza Afkhami suggests that “neither man displayed much propensity for personal relations”. On the other hand, Abbas Milani notes that Nixon´s visit to Iran as vice-president would mark the start of a “close lifelong friendship between him and the shah”. Milani mentions that generous gift giving on the part of the shah would land Nixon in trouble. In 1956 he received a Persian rug, which he did not declare to the authorities. The men also exchanged notes and letters of ´profuse gratitude´. “It was most thoughtful of you to remember Mrs. Nixon and me, as you did during the holiday season with the caviar”. wrote the former president.

However numerous reports have surfaced that the shah also financially supported a number of Nixon´s electoral campaigns. In 1972 he is alleged to have contributed $1 million USD, as well as to his 1960 presidential bid. One thing that would become clear, especially in light of the Watergate scandal and Nixon´s later impeachment, was just how both men had a prickly relationship towards political opposition. In 1972, the shah remarked to his chief advisor Asadollah Alam: “Thank God we in Iran have neither the desire nor the need to suffer from democracy”.

Iran in the 1960s was in the midst of an economic boom. When Nixon entered into office in January 1969, Iran was the single largest purchaser of weapons from the United States. By 1972, with the exception of atomic weapons, Nixon promised to provide the shah with any weapon he desired. Almost a quarter of Iran´s national budget was devoted to military spending. With other US presidents, according to Milani, the subject of Iran´s military budget had always been a ´thorny´ issue, but not with Nixon. Two years before in April, US Ambassador to Iran, Douglas MacArthur II informed Washington that the government should extend annual commitments on foreign military sales for a further three to four years. Yet the response from the Pentagon, or in particular, assistant secretary of defense G. Warren Nutter, was that Iran simply did not possess the absorption capacity to be granted such a large volume of weapons. By 1974, the shah´s military purchases swelled to over $6 billion USD. In order to finance his profligate spending, the shah needed to raise oil revenues, which was something opposed by the US. In the 1970s OPEC was not a force to upset and in 1973, they issued an embargo which lasted until March 1974, because of US support for Israel during the Yom Kippur war. The price in oil quadrupled, yet Iran never joined the rest of the Arab OPEC members in the embargo. In the mid-1970s, according to writer Andrew Scott Cooper, Henry Kissinger warned his colleagues against pressuring the shah for the fear that he would be replaced by an unfriendly ´radical regime´. Later in 1979, journalist Jack Anderson, in a syndicated article that appeared in the Sarasota Herald Tribune, alleged that intelligence documents uncovered previously revealed that ´agitation´ by the shah and ´acquiescence´ by the Nixon Administration granted oil prices to rise in order for Iran to cover its expenses. This was strongly opposed by Saudi Arabia which also tried to persuade Nixon that prices needed to drop. The allegations certainly serve to dislodge the notion that the shah was wholly subservient to US interests.

Gods of the Gulf

In the late 1960s, geopolitical sands were shifting. Britain under the Labour leader Harold Wilson sought to extricate itself from its security responsibilities in the Persian Gulf. This aroused considerable consternation among the Americans, and especially within the Johnson Administration, who took Britain´s actions as a sign of negligence. The shah on the other hand saw this as an opportunity to act as the guarantor of security in the region.

At the same time, both the British and the Americans saw Saudi Arabia as the other eligible candidate for keeping the region safe.  In fact both Iran and Saudi Arabia were cited as part of the ´twin pillar´ strategy, which was outlined in National Security Decision Memorandum 92. The British were less impressed with the shah. Dr Roham Alvandi notes that William Morris, who was Britain´s ambassador to Saudi Arabia in the late 1960s, considered the monarch to be an ´upstart´. Britain, while wishing to get out of the region, was not keen to pin their hopes on him as their successor. They considered King Faisal of Saudi Arabia to be the preferred choice, but his Kingdom, appeared uninterested in taking the reins in regional affairs. For instance, as a point of comparison, at the start of the 1970s, Saudi Arabia´s army stood at 30,000, while Iran´s stood at 150,000.

The geopolitical ambitions of the shah were clearly on display in 1969, when he wished to assert Iranian control over the strategic waterway of the Shatt al-Arab, a waterway that both Iran and Iraq claim. It was not an act supported by the shah´s western allies. While he had the ear of the president and his National Security Adviser Henry Kissinger, the shah was not looked on favourably by both the State Department and the Bureau of Intelligence and Research. Yet by April 1970, there was a consensus that Iran alone could contain Soviet influence within the Gulf. In November of the following year, the Iranians seized the islands of Abu Musa and the Greater and Lesser Tunbs. It was considered a breach of international law, yet the Americans made no effort to intervene. The shah had the audacity to take the islands just one day before the United Arab Emirates was granted independence from the UK. As Simon Henderson from the Washington Institute for Near East Policy points out, the UK and the UAE were not in a position to respond and the US also believed that Iran was sufficient in filling the regional security vacuum. It also signalled to the shah that as long as he boasted his anti-Soviet credentials, he could get away with much in his own backyard. It was the Nixon Doctrine in practice.

In 1971, the shah chose to celebrate 2500 years of monarchy in an egregious display of decadence at the site of Persepolis. Nixon did not attend the lavish event, but his vice-president Spiro Agnew went in his place. Within the next year, Nixon´s own political future would hang in the balance as embarrassing revelations came to light about the break in at the Democratic National Committee headquarters in Washington DC and other efforts by Nixon insiders to go after his political enemies.

The shah´s response to the investigation surrounding the president was one of circumspection. According to some news reports, he was concerned over whether or not the Nixon Doctrine could endure. In August 1973 he told the press at the time, “that everything that would weaken or jeopardize the president´s power to make a decision in a split second would represent grave danger for the whole world”. He never wavered from supporting the president.

In fact he stood by him and even offered to give him employment by representing US companies that wished to do business in Iran. The absence of Nixon did nothing to quell the shah´s spending habits. Both the Ford and Carter Administrations never made any real attempt to rein him in and, as noted by historian Ervand Abrahamian by 1977, “The shah had the largest navy in the Persian Gulf, the largest air force in Western Asia, and the fifth-largest army in the whole world.” Devoting so much energy towards military might was a cause lost to many Iranians who were facing poverty, state control and political oppression. The shah was simply unaware and ill-informed by those around him to know the realities of life in Iran.

In the days and weeks following the 1979 Islamic Revolution, Nixon kept abreast of news concerning the shah. He made visits to his residence in Mexico, where the ousted monarch praised Nixon´s “loyalty to old friends”. The former president even went so far as to denounce President Carter´s treatment of the Shah as “one of the black pages of American foreign policy”. The shah spent much of his remaining months hopping from one country to the next, before settling in Cairo, where he passed away on July 27, 1980. One key illustration of Nixon´s loyalty was his determination to attend the shah´s funeral in spite of warnings by the State Department. He travelled to Cairo, where along with Zahedi he walked with the cortege.

In the eyes of many, both leaders were seen as a disgrace, but in the decades that have followed some revisionists have been kinder. Nevertheless one thing is clear, both of them displayed enormous loyalty to each other, even though their actions brought them into disrepute. They believed they were practitioners of realpolitik, while others believe that while the Nixon doctrine allowed US allies to take greater control of their own affairs and defence, without direct US interference, it also meant that leaders such as the shah were under no obligation to reform the country, democratise or improve human rights. It was nevertheless a potent principle and one that could only truly develop through personal affinity.  According to Alvandi, the friendship that existed between Nixon and the shah helped to bring new ideas to the White House. It was also one of the most prodigious periods in relations between a US president and an Iranian leader. It has yet to be repeated.