Well, I am in Rome again, and I am just baking and boiling each time  I step outside. I am rather lily-white and pasty, and in these parts, Romans tan to excess, and their flesh looks so crispy and roasty-red, that you could serve it with new potatoes and salad.   I finally realise that taking a siesta is not an excuse for laziness, but actually is essential for maintaining a sense of sanity whilst enduring 40 plus degrees. I love napping, and after taking a nap it is nice to wake oneself up with a refreshing iced coffee–yum yum!!

For many people,  the north african state of Algeria conjures up images of violence, terrorism or blurry black and white images of the casbah  à la Gillo Pontecorvo’s Battle of Algiers. It has endured one of the most brutal civil wars in recent history. Between 1992-1998, up to 200,000 Algerian civilians were killed in an orgy of violence that followed the abrupt cancellation of the 1991 National Assembly elections. The ruling FLN  (Front de Libération Nationale) party were fearful of electoral success by the Islamist FIS (Front Islamique du Salut) party. The FIS emerged as the lead challenger since it had sought to address issues that were in desperate need of tackling, such as: unemployment, food shortages and access to education. The FLN–who had been in power since independence in 1962–had devastated the economy by relying heavily on the hydrocarbon sector and failed to support private enterprise.

The FIS was the obvious choice for millions of Algerians who were often too young to remember life prior to the country’s independence, and felt it was their right to speak out. However, the party pushed for greater Arabization and Islamization in the social sphere which was not in keeping in the minds of  many secularists, women and intellectuals. They wanted Algeria to be democratic and desired to see an end to the FLN, but were afraid of the FIS’ theocratic programme for the country.

One woman who had grown particularly concerned by events in her homeland was Khalida Toumi née Messaoudi. She was born in a Kabylic family, and was raised with the firm view that religion should not influence state affairs. She trained to be a mathematics teacher, but was motivated to enter the political sphere after the government’s decision in 1984 to introduce the Family Code which effectively denied women their full citizenship rights, thus encouraging Islamists to push for the  full application of Sharia law within Algeria.

Toumi became an outspoken feminist and was fearless enough to challenge the founding member of the FIS, Abbassi Madani, on national television. It earned her the wrath of the FIS and she was forced underground after a failed assassination attempt against her. In the 1998 book Unbowed,  Toumi speaks at length about the struggles she faced as a public figure trying to uncover abuses perpetrated at the hands of both the government and the Islamists.

Algerian women were a favourite target of the GIAs or the armed Islamist groups that led a campaign of terror in the early nineties. Women were often kidnapped, raped and murdered in a horrendous fashion if they were not seen to be behaving appropriately in public i.e. wearing makeup, jeans and mini skirts. Toumi fought to raise awareness within the international community about these atrocities.

From 1996 to 2001, she was a leading member of the RCD party, which was a secularist Berber party led by Said Saadi. The Berber population has often been at odds with the FLN over its attempts to Arabize Algeria and ignore  Berber cultural heritage. Finally, in 2003, President Abdelaziz Bouteflika awarded Toumi the ministerial post for communication and culture. It is a position that she holds to this day.

Anyone who reads Unbowed cannot fail to appreciate Toumi’s courage. It takes a certain kind of individual to carry on working for what they believe in whilst knowing that their life is in danger. Algeria endured and still endures hardships which sets it apart from the rest of North Africa. However it has many courageous people who have doggedly worked to keep the issues that afflict the country in the spotlight. Khalida Toumi is just one of them. 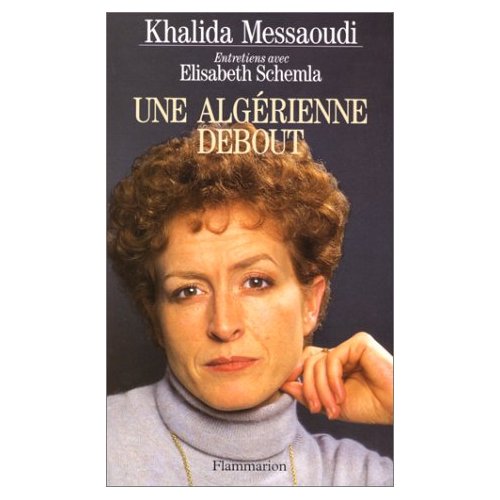