Well,  I hope you are all enjoying an easy-going summer and are not having to suffer the wrath of Belgian bureaucracy. Trust me, it really is a barrel of laughs. I have trekked across Brussels; visited three embassies and seen numerous bureaucrats. I am really relieved to be heading back to Rome for a long break without any distractions.

It is of course now the time of year where you can feel justified in making another stab at War and Peace and other meaty titles. In my case, I will be reading King Leopold’s Ghost by Adam Hochschild , and I am really looking forward to it. It is also timely because this year commemorates 50 years of Congolese independence from Belgium.

Anyway, another book that I believe is well-worth reading is Holy Land, Unholy War by Anton La Guardia. It was one of the first books that I read on the Palestinian/Israeli conflict, and it gave me a terrific overview of region’s history, society and culture. I learnt more than I have ever before about the conflict from a single source. Thankfully the book which was first released in 2001 has been updated and revised, so there are more juicy facts to absorb.

La Guardia was a Middle East correspondent for the UK’s Daily Telegraph for eight years, and now works as a foreign editor. His writing is clear and perfect for those unfamiliar with the conflict. I hope you all have a wonderful summer break, and that you get the chance to read your favourite books.

Here is what Penguin online has to say:

There are few more compelling and more tragic issues in the world today than the bitter struggle between Palestinians and Israelis. Their tiny patch of land, desperately crowded and with few resources, has been a focus for so many years of rival claims and counter-claims that it has become almost impossible to make sense of the daily reporting. The best guide to the region is Anton La Guardia’s highly acclaimed Holy Land, Unholy War. More than any other book, Holy Land, Unholy War disentangles myths and realities and gives a brilliantly clear and thoughtful picture of an unhappy place. This new edition is fully revised and updated to late 2006.

Writing dispassionately about the Holy Land, said Mark Twain, is as hard as being dispassionate about your own wife or children. Today, more than a century after Twain led the way for mass tourism to what was then a remote corner of the Ottoman Empire, the difficulties are redoubled.;The modern struggles of the Israelis and Palestinians – with their larger-than-life stories of disaster and redemption – command the obsessive attention and passion of sympathizers around the world. The 1993 Oslo accords promised to end more than a century of conflict between Jews and Arabs, but the Palestinian uprising that began in October 2000 has raised fears that the fighting could destabilize the whole region.;With the experienced journalist’s eye for the telling detail and anecdote, Anton La Guardia offers an intimate portrait of the people behind the headlines. He explores their histories and cultures: from the religious upheavals of Jerusalem to the extremism of Jewish settlers and Islamic suicide bombers, from the first Zionist pioneers to the post-Zionist generation in Tel Aviv, from the stirrings of Arab nationalism to the Lebanon War.; The author explains how the searing traumas of the Holocaust and the Palestinian exodus have shaped Israeli and Palestinian societies. He also looks at the role of the outside world, from the awe-struck visits of medieval Christian pilgrims to the scheming of world powers. He traces how the promise of peace has turned into the curse of war, drawing on his reporter’s notebooks from years spent covering the peace accords, Islamic suicide bombings, the assassination of the Israeli Prime Minister Yitzhak Rabin and the outbreak of the latest Palestinian uprising. This book is part contemporary political reportage and part iconoclastic history. A dispassionate account of Israel and Palestine may be impossible, but this book is written with the first-hand knowledge, affection and exasperation of one who writes about embittered relatives. 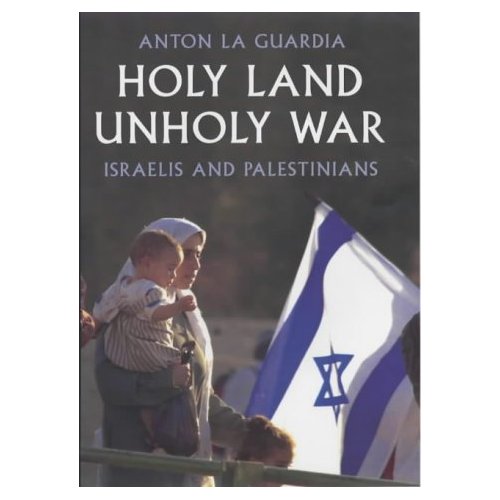