I hope you are all enjoying some long overdue spring weather. I know I certainly am. I have been overdosing on endless coffees this week at the parliament. There is not a lot to do because this is “green week”, in which MEPs are expected to head home to their constituencies in order to let voters know that they are doing stuff on their behalf.

I have been enjoying reading newspapers, blogs and watching YouTube videos. Aww, what joy!

So, if you have not heard, the UK’s Daily Telegraph today featured a piece on the killing of a Hamas commander in Dubai. The story is straight out of an Ian Fleming novel. A group of assassins of various nationalities entered a hotel in pursuit of the Hamas leader Mahmoud al-Mabhouh. His dead body was discovered in his room on January 20.

“According to one report he was killed by a female assassin who entered his room by posing as a member of hotel staff, injected him with a drug that induced a heart attack and hung a “Do Not Disturb” sign on the door.

But other officers said he was strangled, probably after receiving an electric shock”. 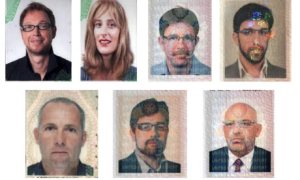 “Most of the individuals appeared to be of Middle Eastern origin, even thought they carried passports with European-sounding names.

Of course, the jury is out on who ordered the killing. is it Mossad, is it not Mossad? No one knows yet. The Irish government has said that it has no record of these individuals. All of them were carrying forged passports.  In order to avoid being identified many of them donned false beards, wigs etc. The operation happened in a swift manner, with the involved suspects, staying no longer than nineteen hours.

The UAE government is delighted with itself that it has uncovered this suspicious chain of events. It means plenty of material for intelligence and espionage talking heads. It also reminds intelligence service of the ubiquitous presence of CCTV cameras. It is difficult to move without being seen these days.